PPRP in Print and Electronic Media 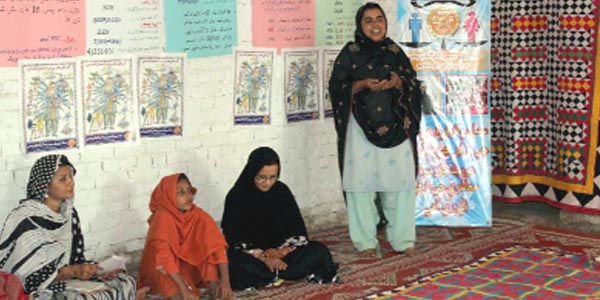 SRSO Efforts Put Northern Dists on an Even Keel

KARACHI - Zohra Bibi of village Chaho Labano in Wazirabad union council of Shikarpur district, who belongs to a very poor family and is absolutely illiterate but quite dynamic, has become the leader of her village. She has organised 323 women in 22 community organisations.
The result-oriented intervention of the Union Council-Based Poverty Reduction Programme (UCBPRP) of the Sindh government has changed lives of thousands of people, especially women, in northern Sindh.
The intervention is being termed as a silent revolution, which has empowered the most suppressed sections of the society. During a visit to the area, TheNation observed that Zohra Bibi has taken overall responsibilities of her village on her shoulders.
Narrating her story, she said, “A young boy of her village was killed in a cattle robbery. She persuaded the village organisation (VO) to set up a community-based security system for their village and it was decided that six posts around the village would be established, where three men volunteers would perform duty. Her initiative has made the lives of her village people safe. Afterward, Zohra started focusing on education. The only school in her village was not functioning properly. The VO arranged teaching staff for the school, which is now functional.
There are so many such stories that happen every day in the northern part of Sindh, where commonly women are treated at the subhuman level. They are killed in the name of honour if they just talk to any male. But, now the things have started changing; the Sindh Rural Support Organisation along with the Sindh government has organised 267,544 women into 15,630 community organisations, clustered into 5,294 village organization and federated into 41 locals’ support organizations in three districts of northern Sindh under the UCBPRP, which was initiated on February 1, 2009 in Shikarpur and Kandhkot-Kashmore.
After analysing its performance in the two districts, the provincial government initiated a similar programme in Jacobabad district in June 2010.
The UCBPRP aims at improving the quality of life of the rural communities, especially of the poorest of the poor, through the conceptual package of social mobilisation, organising them into “organizations of the poor” at the community, village and union council level.
Earlier to that, the SRSO conducted a “Poverty Score Card” exercise in 166 union councils of the said three districts to identify the poor and the poorest.
As the women in these districts had no prior experience of conducting meetings, record-keeping and maintaining registers of the proceedings and accounts, special training sessions were organised for the capacity building of the Cos, VOs and LSOs’ office-bearers. The training is one of the most important components of the programme, because unless it is not done, these organisations could not function effectively.
As many as 153,189 women belonging to various COs, 35,496 of VOs and 371 LSO members and office-bearers are being trained in management and Community Investment Fund (CIF) record-keeping.
These organisations have not only empowered the most neglected sections of the society, ie, women, but also made positive impacts on the social fabric of the society. Nasim is the elected head of the organisation in her village Mudd Khoso. Their tribe had a conflict with another, residing in their neighbourhood, over a piece of land. That feud had taken the lives of as many as 38 people from either side.
Nasim took the initiative and lead a delegation of women of her tribe; they went to the houses of their rival tribe and invited their females to be the part of their organisation.
“They said to me that male members of my tribe will kill them if they came up to them,” according to Nasim, who then took the responsibility for their security.
When those ladies came to Nasim’s house, they were given a lot of respect. Then, the women of both the tribes compelled their male members to settle their feud. The bone of contention was over when the disputed land was distributed to heirs of those killed in the clashes.
According to Dr Sono Kangrani, chief of the SRSO, the UCBPRP also included a component whereby the youth from economically and chronically poor segments of the society were given stipends for receiving vocational training.
Under this component of the programme, 29,547 participants had been trained in different trades. After training many of them have started earning by starting their workshops of motor rewinding, fridge, mobile repairing, beauty parlours, etc. The poorest of the poor, including widows and people living with chronic disabilities, are provided grants to purchase livestock or something that can help them eke out a living on a daily basis.
The most effective powerful and result-oriented intervention of the project was setting up of a village-based revolving fund at the community level.
Under the fund – Community Investment Fund – interest free loan is provided to members of the COs. It has a very encouraging impact on the lives of the common people and saved their money which they used to pay with a huge interest for their agricultural inputs and other things. Almost 75,000 women have benefited from it.

Sukkur- Union Council Based Poverty Reduction Programme (UCBPRP) a Project of Government of Sindh, implemented partnership with Sindh Rural Support Organization (SRSO) empowering the people of the remote areas like Shikarpur, Kashmore-Kandhkot and Jacoabad to overcome psychological problem and opposition of oppress. Such steps by the Government cannot be denied.
UCBPRP is a multi-sector, poverty and women-targeted programme with aims to improving the quality of life of rural communities, specifically targeting the poorest of the poor.
It is mention that CIF is a community-managed fund which consists of a revolving fund provided to community organizations, specifically to poor women. From the self managed CIF, the poorest women are provided with micro loans which they are able to invest in income-generating activities only. It also created the confidence and capabilities of poor rural women due to poorest women who make the decisions and not external agencies.
“Position of women has improved in the areas after launching UCBPRP” this said by Ms. Suhagin, 42 of Village Malhar Bajkani, UC Tagwani, District Kashmore-Kandhkot while sharing her views to APP on Monday. She said that she get CIF loan with her Rs. 9,000 loan and purchased a goat more than one year earlier.
According to Ms. Suhagin, same goat gave birth to two offspring after which she sold the adult goat for Rs. 13,000.
When SRSO first came to our village and explained the CIF programme, she said that the men in her village (including her husband) were very suspicious.
Nazia, 18 Years of age, recently moved to Village Dakhan School, UC Ghulanpur, district Kashmore-Kandhkot when she got married. Upon arriving in her new village, Nazia learnt about the Concept of COs and VO. She become a member and obtained a loan of Rs. 5,000. She used the money to purchase a goat which soon gave birth to two kids. Nazia recollects the moment when she received her CIF loan cheque which was made out in her name.
“It was the first ever cheque that I had received in my life. She said and added that moment I felt a Great sense of satisfaction and a feeling of freedom; at being able to spend that Rs. 5,000 on something that I wanted”
Community Investment Fund (CIF) in Kashmore-Kandhkot and Shikarpur has ultimately resulted in a Provincial Government funding one of the most groundbreaking projects in the history of Sindh as well analysis shows the findings of CIF which had been recorded in other areas of the country, proved the fact that a community-managed microfinance project could indeed be implemented with only the poorest of women and at such a large scale. 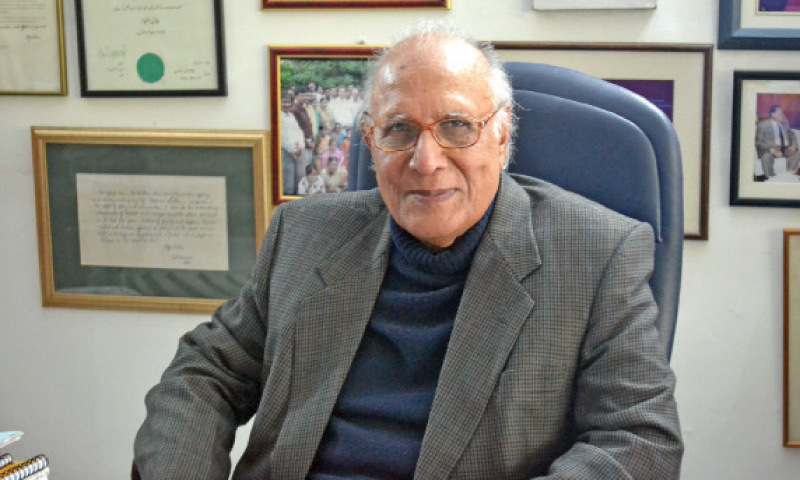 Sukkur - Chairman Sindh Rural Support Organization (SRSO) Shoaib Sultan Khan has said that on the basis of findings regarding Union Council Based Poverty Reduction Programme (UCBPRP) poverty has been completely eliminated from programme`s targeted rural districts like Shikarpur, Jaccababad and Kashmor-Kandhkot but the findings only indicate an indisputable trend of the effectiveness of UCBPRP strategy and approach to banish poverty from the rural areas of Sindh if a 7-10 year programme based on UCBPRP principles of development is implemented.
“I experienced first hand the achievements of UCBPRP” he said during his three days visit to UCBRPS areas while talking to APP.

He said that the achievements of UCBPRP in a short period of three years were mainly due to the willingness of the communities to fulfill the obligations of development partnerships, secondly honest and competent leadership chosen by the communities to lead their organizations and dedicated and committed leaderships and field staff of the support organisation like SRSO and above all the ownership and support by Government of Sindh (GoS).The willingness of the communities was reflected in over 182,651 women getting organised in 10,556 COs and getting a large cadre of service providers of men and women trained. These were the social capital of the UCBPRP and the mainstay of the program,

During my visit, he said the VOs have not confined themselves to UCBPRP interventions only. Once organised, they have ensured access to government programmes of eligible households be it BISP, Watan Cards or NADRA Cards. Some have also facilitated entry of the entitled members of COs in Voters List. Some have taken initiative in preparation of birth and death registers, weekly cleanliness of village campaign, periodic health seminars, exhibitions, tube legations for family planning, marriage of poor girls, prevention of child marriage, helping the destitute due to physical infirmity.

He further said In health, besides making use of the micro health insurance being offered by SRSO through Adamjee Insurance which is ensuring commendable health facilities to insured clients as we witnessed at a Sukkur hospital being run by Blood Bank of Fatimid Group, the VOs are also participating in polio campaign and in getting traditional birth attendants well trained.

According to SRSO`s chairman the visit to one of the 42 flood affected villages rehabilitated by SRSO, under the Sindh Government Village Rehabilitation Project, conceived by Dr. Kaiser Bengali and Ms Naheed Shah Durrani was indeed a heartwarming sight. A neat and clean village with every house having their own toilet, handpumps and water tank on top of the toilet added that Rehabilitating 42 villages in a span of 18 months covering thousands of houses is indeed an incredible achievement by Chief Executive Officer (CEO) SRSO Dr. Sono Kahngharani and his staff adding that Dr. Sono and UCBPRP field staff, despite the area affected by floods in 2010 and 2011, worked with tremendous dedication and commitment meeting most of the targets of the programme.

He said that SRSO has by now imparted vocational training to thousands of males and females by outsourcing it to NRSP- Institute of Rural Management (N-IRM). One of the steps N-IRM took to meet the challenge of training such a large number of rural women was to establish Vocational Field Training Centers and we visited one of those at Thull. Such Centres greatly facilitated training of rural women, who according to tracer studies, carried out by Sukkur Institute of Business Administration, engaged a very large proportion of such women in gainful employment. All these factors contributed to the Extremely Poor and Poor families improving their economic status, he maintained.

He told that more than 75 women activists came to meet us at Sukkur representing over 30 LSOs from different districts spoke of their achievements and how they have tried to improve governance by collaborating and forging linkages with Education, Health and other departments and organizations.

According to Chairman SRSO, Khan the women of LSOs gave a most impressive demonstration of their qualities of leadership and the activities they had undertaken in a short period of less than two years which reflected what institutions of people are capable of achieving including good governance by persuading government departments to deliver services effectively and be accountable to people and forging linkages with outside agencies.