With an aim of empowering the marginalized people (especially women), SRSO pioneered organizing women rural communities into the folds three tiers Social Mobilization structure of Mahala level Community Organizations (COs), Village level Village Organizations (VOs) and Union Council level Local Support Organizations (LSOs). SRSO has the privilege to organize 128 LSO's in its operational area. All LSOs are being led by women, being the incredible achievement of SRSO among other development organizations working in the area.

The COs/VOs/LSOs take a lead role in the implementation of various developmental activities directly as well as through SRSO. The COs implements the activities for livelihoods and social protection including identification of micro credit beneficiaries, participants of skills training and micro grants. The VOs generally take care of community physical infrastructure while the LSOs act as apex institutions at the Union Council level which in some cases directly implement various activities and in many cases provide guidance and monitoring support to the VOs and COs. In all cases, they represent the foundation of the community institutions i.e the COs and their members.

SRSO has been dedicatedly investing on capacity building of LSOs for last many years with main focus on managerial, financial and record keeping management training. Besides this, special focus has been given on capacity building program on development of linkages to get maximum benefits from other available sources including government for the sustainability of these institutions. SRSO believes that Social Organizer alone cannot bring change but with the involvement of the community. So with the combined efforts of both staff and communities it took a long time to trigger women LSO members for realizing and identifying social issues and their solutions. This leaded to initiation of remarkable development activities by community itself in the areas of education, health, gender and development, livelihoods, agriculture and others.

The benefit of having such institutions of the people is manifold, such as:

Tribal system is quite prominent in upper parts of Sindh province in which issues related to disputes among different tribes and honor killing are very common. It is quite remarkable that in many cases women members from different LSOs took initiatives and were the reasons for resolution of long lasting disputes among different tries via different negotiations. It has been reported that many lives have been saves via utilization of LSOs and VOs platform that would have been killed for Honor Killing. These LSOs have created history by resolving conflicts/ issues which caused massive bloodshed in the past and were neither resolved by Police, Politicians and/or Landlords. These communities are committed in their mission and will continue their journey towards peace.

The myth of “educating a girl leads to serve the entire generation” has taken seriously by the women LSOs. Zohra, a community activist, contributed in making many nonfunctional schools to function which fulfilled the basic requirements of many girls and boys in the village. This encouraged many women activists to take initiatives and join hands in the mission. An LSO named Sujag (district Shikarpur) also took prominent initiatives in promoting education via conduction of awareness raising sessions in the villages for the purpose of promotion importance of education and increase in enrollment of children in the local schools. Taking this initiative as model many other women LSOs in the area replicated the said initiatives.

SRSO believes that development of linkages of grass-root level institutions plays a very important role in initiating the development activities on sustainable basis at larger scale. Keeping this in view, SRSO initiated the capacity building programs of LSO members with more focus on institutional and linkages development. Year 2012, indicated remarkable achievements in this regards as almost all women LSOs worked quite actively for the development of linkages with local/international organizations including government of Pakistan; working in the target areas.It has been reported that development of linkages helped in solving many local issues and initiated sustainable developmental activities in the areas which includes deputing teachers in schools, access basic health facilities,opening of banks accounts for local community individuals (women/men), access to flood relief services and many more interventions.

The Role of Women LSOs in Polio Awareness campaign was worth mentioning. It started with a polio project executed by SRSO through RSPN. The response of LSO members in understanding the importance of polio vaccine was encouraging as expected. These LSOs continued their efforts even after completion of project by developing linkages with district health departments for ensuring outreach in polio campaigns. These women went door to door to raise awareness about the importance of Polio Vaccine and helped government health department to reach every child. LSOs are enthusiastic in demand generation and are still willing to work voluntarily in this noble cause.

In the year 2012, awareness raising on social indicators were also some of the objectives of LSOs which included discouraging early childhood marriages, promoting education for girls, Importance of computerized National Identity Cards, women's registration in voter's lists, importance of marriage and death certificates etc. Communities in the remote villages were sensitized via conduction of awareness rising seminars, workshops, rallies and by celebration of important days. 5,000 community women were facilitated with computerized CNICs in coordination with NADRA. 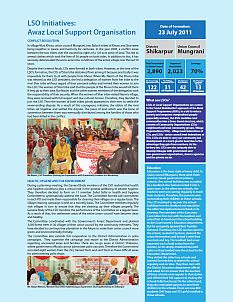 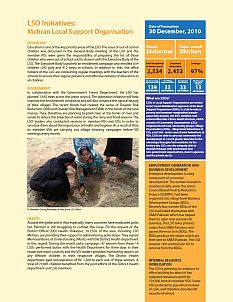 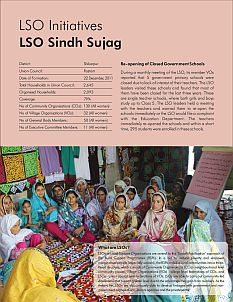 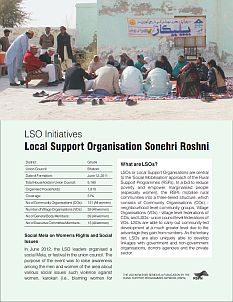 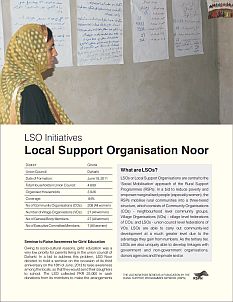